Friends Records is a label that features releases from Baltimore artists (plus one release from Meth Dad, a non-Baltimore musician). They just celebrated their fifth anniversary (which is where the picture of label head Jimmy was taken jamming to Microkingdom on night 1 of the festivities). Friends Records is just that, people who are friends (and also make great music). Over the last five years, they have put out rock and hip hop and jazz and anything you can think of.

I am not going to link to all of the artists pages, just to Friends Records Bandcamp, where you can find these and other tunes.  I will talk about each of the songs/artists in the tracklist.

Edit: I am adding in label head Jimmy’s comments on each release. 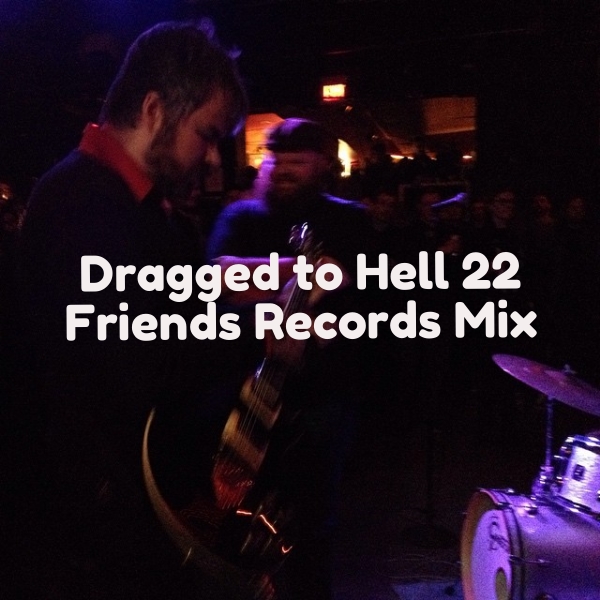 Chester has been such a big part of the label as far as production goes. He recorded more than a handful of our releases and has always been an excellent friend, resource and all around man of inspiration. He has new material coming out with Outer Spaces in 2015!

INEVERYROOM is Chase O’Hara and Amy Reid … became Chase N’ Amy for a minute and eventually they started Chiffon together. Our most limited release is a INEVERYROOM/Lands And Peoples split cassette which was our 2nd cassette release. We only ever made 23 copies for a tour that they did. I’ve completely worn out my only copy and it doesn’t exist digitally. FRCS002 RIP. Long live Chiffon!

For me, there is no almost about it. In 2009 Celebration started releasing songs and videos for Hello Paradise – Electric Tarot in a digital format only. For the first year that the label existed, Brett Yale, the other half of Friends Records, had been emailing the band, offering up our services, on a regular basis. One night he got an email asking if we could all sit down. We went over together and before we went in we sat in the car and talked about how weird it was that we were meeting people that we didn’t know really and seeing if we could work together. Up until that point we had only ever worked with people that either one or the other of us had known already. So we went into Katrina and Sean’s house. We spent about 3 hours sitting around a kitchen table making 6 great new friends. 4 years later I still find myself sitting at that kitchen table listening to and telling stories and jokes and talking shop. You really couldn’t ask for a more complimentary band to associate ourselves with. They brought a lot of attention to a lot of other bands just by working with us and for that I am forever grateful. They ruled the second half of 2014 and I don’t see 2015 being any different.

Josie and Drew don’t sound like Baltimore to me. They don’t sound like anywhere. Their music is all encompassing and blocks out any light from the outside world when you play it. I know that they already have some new Blacksage material in the works but Drew Scott just dropped The Drewcifer Tape last month and Josie is hard at work on both Softeyes and her solo work. They’re both fountains of awesome shit right now. Get a cup and try to catch some while its flowing!

Looking to reissue Wading in LP (it’s sold out currently) and we have been talking about a cassette boxset rather than individual reissues of his 6 (!) albums again. I don’t think there is any movement in the Moss Of Aura department at the moment but he is out setting the world on fire with his friends.

I’ve talked about Meth Dad aka Tyler Walker recently. Dude changed the way that I listen to pop music in a huge way. He just put out a remix of Taylor Swifts “shake it off” on his soundcloud. While I would never advocate for Swift, Meth Dads remix is outstanding and should be played in every coke commercial and New Year’s Eve party ever.

You and me both. Jenn always surprises me: This year I saw her take part in the Gene Clark tribute at Floristree and 9:30 Club. They were 2 of the best live performances that I’ve ever seen. I don’t expect it to be topped ever for me. Then I drove up to Lancaster and watched her and Andy move a whole room of people as Wye Oak. I think that they’re on top of their game with their latest album and doing the most interesting music since the Monarch days. Then there was her Flock Of Dimes performances at Fields Fest and at the Horse Lords release show at the Crown. She had really secured her sound as Flock of Dimes and much like Microkingdom, every time I see her play its my new favorite time that she has played. Total pro with a heart of gold.

Look for a new Raindeer release very very soon! The set that they played at the recent anniversary show floored me. They’ve come so far as a band since the lineup change.

Brett always had a space reserved for Liz on our roster. It has been 3-4 years now of waiting for “take me out to see” but it was well worth it.

This song is particular is my jam. Height is the most prolific artist that we work with. He has put out 5 full length albums since we started the label 5 years ago and he has another one in the chamber about to drop real soon. We have been trying our hardest to keep up with him. Look out for his tour later this month.

This record was the reason that the label was started in the first place. In October 2009, Brett was interviewing Future Islands, drinking beers on a roof, when they started talking about how much they wanted to put out a split with their friends from college, Lonnie Walker. Brett said he would do it and the first light of the label went on. Over the next 2 months we ended up making plans and laying groundwork. In late December 2009 we had our 3rd of 3 Sunday brunches at Morning Edition on Patterson Park (RIP) and decided to go ahead with the idea. We had decided that if we were going to do it that it wouldn’t just be the one release but we would do 3 releases to start (weekends and Sri aurobindo and the f.i/lonnie walker split). Almost immediately the f.i. split got postponed and by early January we decided to release Height With Friends “Bed Of Seeds” in the meantime. We have gone on to work with them every chance that we get. The success that they’ve found came from the hardest hustling and grinding that I’ve ever seen in this business and it couldn’t have happened to a group of kinder and more deserving dudes. I love that they still rep and support us whenever they can and I love continuing to support them. I got to see them live in New York for the Letterman taping this year and you knew right away that they had just changed everything. I also got to see them turn The Avenue in Hampden into a sea of people this summer. Monday I fly out to Boston to follow them for a short run of dates with Wing Dam.

Speak of the devils. One night ,3 or more years ago, Austin And Sara came into my store and wanted to put their cassettes up for consignment. Austin was Wing Dam and Sara was Which Magic. It was and still is so much fun to watch them grow as artists. They joined forces with eachother and then with former Lower Dens and sometime Snails drummer Abe Sanders. Abe is a hell of a dude. I first met him when he directed a Moss Of Aura video for us and then really got to know eachother a bit better on the Snails tour in early 2013. They’ve kept the candle lit in the Friends Records house a lot this past year, getting all kinds of attention, press and year end list mentions for their most excellent “Shifter Bliss” record.

Look out for Adam Lempel releases this year but no more Weekends for a while. Was glad to see them end it properly at the Ottobar a few weekends ago.

Sri Aurobindo RIP. The band called it quits this past year when one of the members moved away. Mike Romano who played bass/guitar in Sri as well as on the first Vincent Black Shadow record has a new band named Cryptid. They played their first show at the Anniversary shows. The band features Mike, Elijah Forrest, Aaron Estes and Spencer Adams. Expect to hear something sometime.

This is the most fun thing that I’ve done ever. We put out their debut double 7″ and then proceeded to go on tour with them for 8 dates. Most fun. Ever.

Dave Jacober for President! The dude can do no wrong. So chill and so right on with everything he does. He has 2 new solo albums prepped. Both radically different from eachother, both amazing. Keep an eye out for those.

I don’t think it’s any secret that I’m a diehard Microkingdom fanatic. I know that I say that every time that I see them is my favorite time but their set on the first night of the anniversary shows was the best thing that I’ve ever seen them do. Look out for the new LP officially getting a release on Valentine’s Day 2015.

(photo by me at Friends Records Fifth Anniversary show Day 1)